his Easter we will be saying goodbye to Des Scott as he retires from Church Army. Des has been with Church Army for over 30 years and in that time has had many different roles and served in numerous contexts. From joining as a youth worker in 1989 through to taking up the role as Deputy CEO and finally CEO, Des has given fully of himself to Church Army’s vision of giving people everywhere the opportunity to encounter God in both words and actions and equipping the Church for mission. 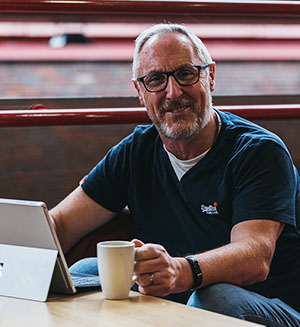 Do you remember your first day at Church Army?

I remember it well. It was a mix of scary and exciting but I was just was looking forward to getting stuck into that vision and trying to help play my part in seeing it fulfilled. I came in as a youth leader and I had a heart for young people. I worked at a youth centre called Brookfield House in central London. We’d run weekends called Life in London which were geared at helping young people to look at real issues and see how the gospel fitted into those. But it was a scary position for me, stepping out. I love being in the background making things happen, and stepping out into the forefront is never the thing I’ll put my hand up to do first, but my whole journey has been one of stepping out in faith and Church Army has always helped me fulfil my potential and push me out of my comfort zone to enable me to do that.

What have been some of your other roles at Church Army?

After first coming in as a youth worker in 1989 I then went on to run Marylebone in 1996. It had just reopened after a major refurbishment. A few years later I moved to Blackheath to work in the Chief Secretary’s Office. I took a break and did other things for two or three years but then I came back to Church Army to help with the transition of chief executives. I worked with Philip Johanson for his last few months and then helped Mark Russell as he settled in. After that, I ran training for a number of years as we changed from residential training to mission-based training, which was a  stepping stone to where we are now. After running the training programme I’ve been back working in the Chief Executive’s Office and have had two or three roles, latterly being Deputy Chief Executive from 2012 through to June 2019.

How do you think Church Army has changed and what is different?

We’re a very different organisation now than when I joined and most of that has been Church Army adapting and changing both its environment and to the context in which it
works. One of the most noticeable changes has been the deliberate intention to work outside of the Church and to build new Christian community.

During your time, what difference has Church Army made to the mission of the Church?

I think the impact that Church Army’s work has made on the mission of the Church has been totally underestimated. I’m grateful to Mark Russell for getting the profile of Church Army up the agenda so people could see more clearly the work we were already doing. Now, I think the research, the training, the resources, and the frontline work are speaking for themselves. We’re playing a key role in helping the Church engage in mission. So for me it is a significant catalyst in the mission of the Church, both in what it’s doing but also in encouraging other people to get involved.

What is your take on social action Vs. proclaiming the Gospel through key projects like Marylebone? Are the two compatible?

That’s an interesting question and one that’s been around as long as I can remember. Personally, I don’t see a distinction. For me, the gospel is the gospel, is the gospel. If I look at Jesus’ ministry in the four Gospels, I don’t see any distinction; the two went hand-in-hand. He cared for the whole person. For me, the gospel is meeting someone at their point of need, unconditionally. Whether that might be in practical help, demonstrating God’s love through caring, or through preaching. The important thing is that all of what we do points people to Jesus. That’s why I love our strap-line: sharing faith through words and action. 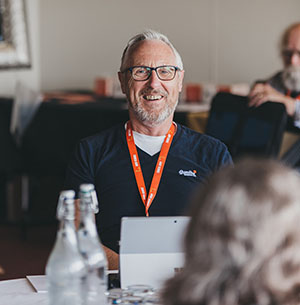 Out of all the people you have met over the last 30 years, who has had a significant impact on your life?

The person who has had the most significant impact on me is Archbishop Desmond Tutu, who was the president of Church Army, because his life demonstrates what he talks
about. What was so noticeable about the time he spent with people was that he was genuinely interested in them, no matter who they were or their circumstances. We saw this when he
spent time with people in Marylebone. He was prepared to stop in the street and pray with people. Even on the last morning of his stay, he went missing in the hotel and he was found in the kitchen saying thank you to all the staff for the way they looked after him. When he writes to me, he calls me Dear Namesake, because we’re both called Desmond.

What’s one thing we can learn from Church Army’s past to inform our future?

What have the last 12 months been like as you’ve led Church Army through the COVID-19 outbreak?

This last year for me, as the CEO, has probably been probably one of the most challenging years of my time with Church Army. There has been the challenge of making sure that we have the money we need to go forward, and the challenge of keeping people safe. I am so grateful for the staff at places like Marylebone and Ty Bronna, for their tenacity in keeping themselves and those they are working with safe. It has been a year of challenges but also a year of seeing a God of surprises, at work. We’ve seen our Redeemer God working in situations where it seems hopeless, bringing hope, and bringing light into darkness.

What are your plans for retirement?

The one thing is, I won’t be able to do nothing. Because I will just drive everybody mad!

What is one encouragement you would leave us with as you prepare to retire?

My prayer for Church Army would be that you continue to be open to the leading of the Spirit because I think there’s amazing work ahead for Church Army to do in enabling the Church to fulfil its call in mission.

Des grew up in Northern Ireland and came initially to London to study Theology. He also has a Postgraduate Diploma in Management and a Masters in Business Administration. Des’s passion is for social justice and seeing people and communities have the opportunity to attain their full potential.

Hi, I am Aderemi Amusa, the Catering Coordinator at the Marylebone Project. I have been a chef for over 20 years and, yes, I know I do not look it! I love cooking and enjoying creating a dish just from simple ingredients. Food puts a smile on people’s faces and… Read more

Chocolate Box is a Church Army project supporting vulnerable women in the North of England. Our aim is to provide love, support, and opportunities for change, with an emphasis on building community and sharing the love of Jesus!   Chocolate Box is a place of belonging for lots of women… Read more

Sharing faith in an ambulance

My doctor was insistent, almost threatening. “You must go to A & E immediately and have an MRI scan.” It was midday on a Thursday just before Christmas so I set off obediently for Hinchingbrooke Hospital a few miles away. For two months I had been suffering severe pain in… Read more