Evangelism in a Permacrisis 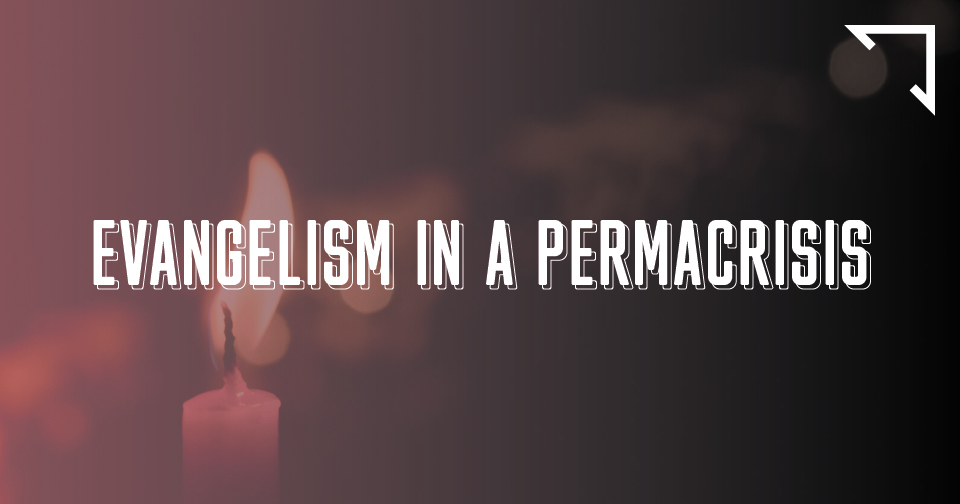 I think that if I were to describe the state of the world at the moment as ‘unsettling’, I would be hard pressed to find someone who would disagree. Reinforcing this feeling is that fact that ‘Permacrisis’, is Collins Dictionary’s word of the year.

We are facing multiple challenges, nationally, internationally, and existentially. The impact of the pandemic, a war on European soil, and the climate crisis have left many feeling exhausted, anxious, and increasingly skeptical about tomorrow. The wealth gap is growing, our culture is fragmenting, and our political system is becoming increasingly polarised. As you walk the streets you can feel the stress and tension people are under.  How do we share our faith at such a time? The temptation could be to say that there is too much going on, people don’t want to hear it, people don’t have capacity to hear it, so we stay still and silent about the Good News that we have. But how exactly is what we have to share good news, if it isn’t good news now? To answer this question, we need to think carefully about this complex web of challenges we face, and the emotions they provoke in many of us.

Before we delve deeper down this rabbit hole, I want to share something of who I am, so you can understand my perspective, and the perspective of others like me, better. I was born in the late 1980s to white British middle-class parents. My childhood coincided with the end of the Cold War and the opening up of the Eastern Bloc, and with it a sense of optimism for the future. While I have vague memories of bombs in Ireland, it wasn’t until the attack on the World Trade Centre that I felt like the world could be a dangerous place. I was fortunate in that my family, while not wealthy, were comfortable, and so I had the luxury of taking my time thinking about what career I wanted to follow, rather than rushing to a job to pay the bills. And while there have been wars in my lifetime, in Iraq and Afghanistan, in which people I went to school with were killed and injured, they still felt distant. In short, I have been fortunate to feel a huge amount of security that the world was a reasonably safe place, and that I had a high level of agency to make choices about my future.

The last three years have shaken that worldview to its core. In a short space of time, a pandemic, a war, and the urgency around the climate crisis have reduced my sense of security, while also making me feel like a passenger just along for the ride, at the mercy of others. The sense that modernity would impose itself on the world and bring order and reason has gone. Before you get the tiny violins out, consider how many others were raised like me, who feel like the foundations of their future, but also their children’s future, have been ripped out from underneath them. Then consider how many of them, unlike me, don’t have a faith to fall back on.

The Church did not grow at first through those who were world shakers, but those whose worlds were shaken.

Fortunately, our faith did not develop in the classroom, amongst the powerful, but in the homes of the powerless. Our forebears in the faith were first nomads, at the mercy of settled peoples; then a tiny kingdom, at the mercy of mighty empires. The Church did not grow at first through those who were world shakers, but those whose worlds were shaken. Our faith is not designed to support those in power, but to comfort and vitalise those who are stamped down, that it will not always be this way, and that they are not alone.

While it might be melodramatic, and somewhat self-pitying to place ourselves in the position of those persecuted by empires, we are not entirely dissimilar. What we have in common is a lack of control over wider world events, over occurrences in the natural world, that we might have thought our time and place in culture had put us beyond.

Before we can consider how to share our faith in this new world, we need to first understand what it is our faith offers. For a long time we have fallen into one of two traps; to offer good news on the worlds terms and so move towards a prosperity gospel, or speak only of personal spirituality, where our faith gives us a warm glow but doesn’t offer answers to the challenges of the world. Both options have been guilty of proof-texting, searching for those nuggets of scripture that answer the particular questions they are asking. Both of these have also privileged certain experiences, in which the everyday needs of people are taken care of and spirituality offers that little something extra. Ivory tower theology has strengthened this perspective, and while the development of sound theology is important, in the West we have privileged this role above others in our leaders, leading to a head-heavy emphasis in our ways of exploring and practicing faith.

Instead, we need to see that we are more like the early readers and writers of scripture than we might at first think. We need to immerse ourselves in their world, see the perils and dangers that they faced, and try to understand how they did so with an honest, heartfelt belief that they were a chosen people who would be the light of the world.

In many ways, I think that the current turmoil that we see around us should remind us that our hope is not in this world, but beyond it. I love the imagery that Tom Wright uses, of reaching forward into the Kingdom of God, to bring pieces of it back into the here and now. But however much we bring back, we will not be in the Kingdom until God says that the time is right. The general sense of stability that we have had in the West for decades, alongside key markers for quality of life like decreases in infant mortality, increases in life expectancy, the reduction of infectious disease as a significant cause of death, has lulled us into thinking that maybe we can create the Kingdom if we just work hard enough. I’m reminded of the tribes waiting at the river Jordan to cross into the Promised Land, and two of them deciding that this is far enough and they won’t go across to the other bank. They mistake what seems good on this side of the river, for what is actually good on the other. Our hope is not on this side of the bank, but the other, and we only reach the other through the work of God.

We need to ground ourselves by remembering that our hope is not in todays solutions but in tomorrows promises.

So how do we evangelise when it seems like the world is out of control? I think we need to ground ourselves by remembering that our hope is not in todays solutions but in tomorrows promises. Promises of a world where there is no hunger, no pain, no tears. Where the presence and goodness of God permeates all, where weapons of death are turned into tools of growth, and where all creation is in harmony. If we do this, we can keep our eyes on New Creation, and see the good news of personal salvation as one part of this. Many people today, especially of younger generations, are pessimistic for the future. They believe that even if we are able to overcome the challenges ahead of us, that the future will be significantly worse than today. By contrast, we can offer a hope for the future, one that does not deny the challenges of today, but which accepts them and is not defeated by them. In doing this we echo Paul in his letter to the Corinthians, ‘Death is swallowed up in victory…Where O death is your sting?’

Disclaimer: Blogs are written by individuals within Church Army. All opinions shared in this blog belong to the author, and are not necessarily those of Church Army.

The Cost of Living & the Sovereignty of God

Everyone I have spoken to recently is, to some degree, anxious about the cost of their energy bills this year as; the temperature begins to drop, the extra layer is no longer “cutting it” and the temptation to push the thermostat up a degree (or even two!) is becoming too… Read more