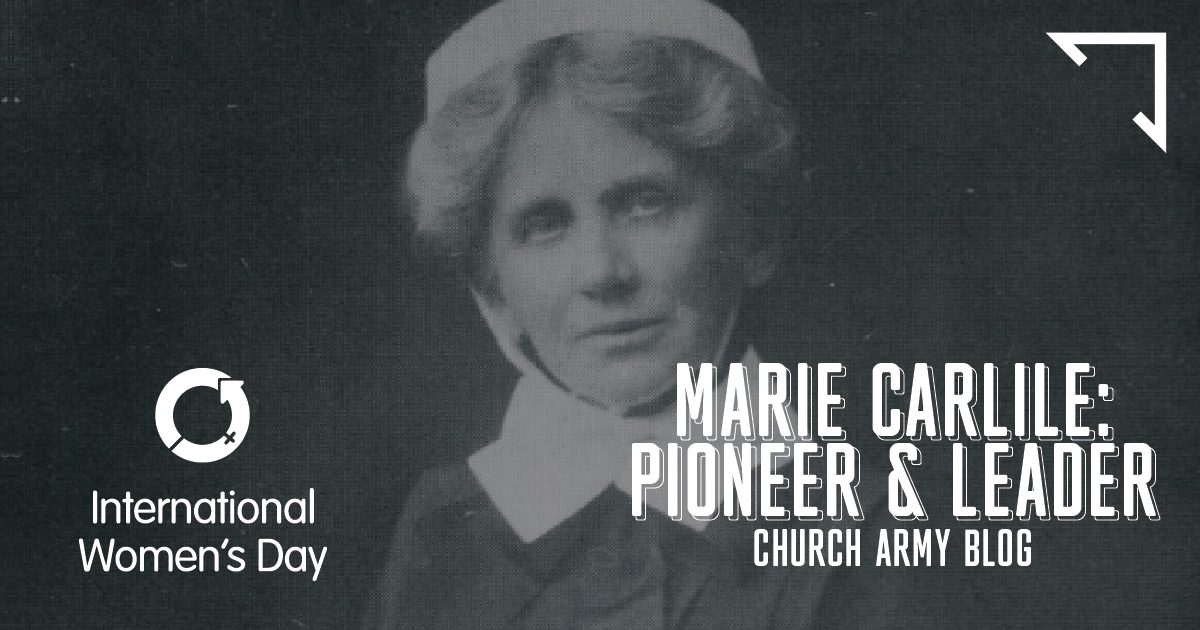 “What good can such a small frail person do there?”

This was what the neighbours of the Carlile family thought, when Marie Carlile’s father permitted her to go and help her brother Wilson by establishing Church Army’s Training Home for Women in 1888. Six years after Wilson had started training male evangelists (known as Captains), he asked his younger sister Marie to come and oversee the training of female evangelists (Sisters). Her father agreed that it would be temporary, as she was small and often unwell, but she stayed in that role for 50 years.

Despite having grown up in a wealthy Victorian household, she swapped comfort for hard work, and was single-minded in her efforts to train and deploy women in Church Army, forming what was probably the first large-scale opening for women workers in the church.

In the early parts of the 20th century, women training under Marie Carlile undertook much of the same learning as their male counterparts, studying theology alongside them. They were also equipped with some skills in nursing and social work and were sent out to serve amongst the poverty and deprivation found in both inner cities and rural villages. One account written in 1928 observes, “A Church Army mission-sister aims at combining the evangelistic with the social to an extent undreamed of by the male evangelist…”

She led the women’s work with humility, not seeking praise or attention. But, inspired by her devotion to the Lord and her love for the lost, she made a huge impact:

“To a most striking degree the Church Army mission-sister is a reproduction of Miss Carlile. She has, indeed, stamped her personality on the women to a greater extent than her brother has on the men. In their devotion, their burning sympathy, their evenness of temper, their habits of thought, frequently in their smile and their speech, the Church Army mission-sisters are reproductions of Miss Carlile, and we can ask for nothing better.”

As well as her work heading up the women’s training in mission and evangelism, Marie supported her brother Wilson Carlile in the running of Church Army’s operations. It was said that at the end of each day they would meet together when the offices closed and go over the problems and obstacles the organisation was facing together. One observer claimed that “without her counsel, her modifying and softening influence, her alert instinct and womanly intuition, shipwreck might often and easily have come.” After her death in 1951 her memorial stated,

“She helped her brother to create the Church Army and opened a door for the training of women for whole-time service in the Church. Through her selfless life and devotion to her Lord countless lives were enriched and brought from darkness to Light.”

2022 marks 140 years since Church Army was established, and as we look back over our history we can still see the legacy left by Marie and the way she championed and released female evangelists. In my role as a tutor working with Evangelists-in-Training, I can see all of the traits used to describe Marie and the mission sisters are present in our evangelists today – both male and female – over a hundred years on. So today we thank God for her and for the many female evangelists who have followed her. May all of Church Army continue to be devoted to the Lord and bring countless people from darkness to Light.

If you would like to find out more about where Church Army came from and the foundations that have kept us on the frontline for 140 years you can visit churcharmy.org/140

As part of her MA, Beth Burras, Formation Lead and Tutor in Church Army's Training Team, conducted pioneering research on evangelists' vocations.   Beth says, “I’m the formation lead for Church Army’s training team, and I also sit on discernment panels for candidates exploring a vocation to be a Licenced… Read more