2022 marks the 140th anniversary of the founding of Church Army.

It is often remarked that in life, only death and taxes are certain … to which might reasonably be added constant change. I would conjecture that the founder of Church Army, Wilson Carlile, would have thought that the love of Jesus Christ was a more secure matter than either death or taxes, but I would be certain that ongoing change and development were a necessary part of how he understood his own life and the mission of Church Army.

Here at the Wilson Carlile Centre in Sheffield, where our national operations are based, we have a glass cabinet containing some things that Wilson would recognise. A notebook is there, filled with his miniscule and famously illegible handwriting, one of his trombones, even a pair of his pince nez glasses. Step away from the cabinet however and there is almost nothing beyond the name of Church Army itself that is the same as it was when Wilson hung up his prayer book, let alone when Church Army began. Yet, my strong sense is that in the Church Army of today, and in our vision for where we understand God is calling us, Wilson Carlile would recognise and rejoice in the Church Army of the 21st century. 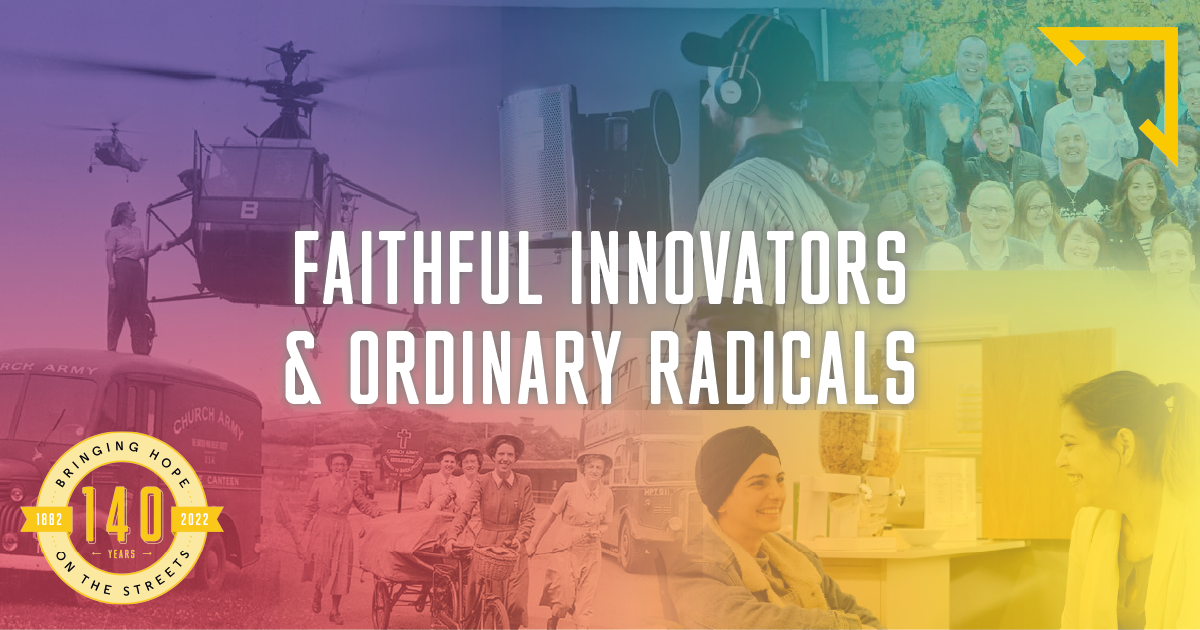 In his life Wilson Carlile displayed the recognition that you don’t get different outcomes simply by doing the same things, by playing it safe. He lived in a UK and Ireland where poverty and exclusion marred the lives of millions. He was ordained into a Church of England from which many were alienated by the same patterns of exclusion. He wanted a different world and a church that was more generous in its embrace, and Church Army was the result.

Over the 140 years since we were founded the mission of Church Army has taken all manner of forms and I will not rehearse them here. Suffice it to say that despite the continued vibrancy of our work and the growth we are experiencing, across the span of years there are probably more things that we have ceased to do, or have developed for a period and then set aside, than things we have continued without interruption. Yet, as I say, I believe that Wilson Carlile would recognise and rejoice in the Church Army of the 21st century.

What then is the relationship between change and continuity? How does something stay the same despite the fact that more or less every aspect of it is has gone through profound transformation over time?

The Archbishop of Canterbury used the term “faithful innovation” in an address to the General Synod of the Church of England a few years ago. It is a good phrase. It reminds us of the need for those who are called into God’s mission to be radically responsive to changes in lives and social orders. It also reminds us of the faithfulness to Jesus Christ and his pattern of the missionary God that is always the lens through which we understand and assess innovation. Most importantly, however, I suggest that it makes faithfulness a matter of innovation. Staying the same, never departing from well-known and deeply loved patterns of life, even church and Christian life, does not make us faithful. To be faithful to the pattern and call of the incarnate saviour is to embrace innovation, to let go what has been so that we can receive what by God’s grace is and will be. It is because Church Army remains just such a bunch of what the American evangelist Shane Claiborne would call “ordinary radicals”, that Wilson Carlile would recognise and rejoice in the Church Army of the 21st century.

Peter Rouch has been CEO of Church Army since mid-2021. Before joining Church Army Peter worked with Lambeth Palace, as an Archdeacon, a parish priest in an inner urban estate, and in academic roles. Peter, his wife Tracey, and their dog Jaffa, very much enjoy life in Sheffield and they all love it when the daughters of the household, Rebecca and Kezia, return to the nest.

I’ve been involved in working with missional communities and evangelism with marginalised and disadvantaged groups for over 25 years. This experience shaped my starting point for developing LEAD our new learning resources for growing leaders; What do I wish my 25 year old self had known about leadership? How am… Read more

To Eat or To Heat?

As energy bills and the cost of living are sky-rocketing across the UK and Ireland, it is a truth universally acknowledged that it will be the most vulnerable members of our society who suffer the most. For single-parent families, the disabled, the out-of-work, the asylum-seekers, the homeless and deprived communities… Read more

The Wealth of the Cross

Always be prepared to give an answer to everyone who asks you to give the reason for the hope that you have. 1 Peter 3:15 For the past few years, I have been involved in interviewing the Evangelists-in-Training at Church Army to hear about what they are learning, and how… Read more